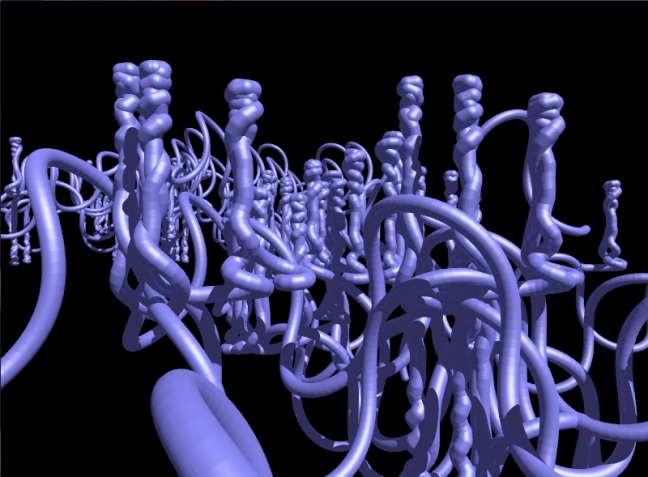 As promised, having created a new Universe, here is a postcard. I hope you weren’t expecting lush strange forests with bizarre animals at my feet; this universe is brand new and hasn’t quite inflated yet, let alone generated organic life. Let me explain.

This universe was created with the Creation Equation (more here and scary maths here). This equation serves to create “things”. Sofar I have used it to create organic-like things or every day design objects, as in the examples below.

Now that is cool and all that (more here if you agree), but these things were carefully designed. As I laid in bed admiring the gorgeous maths of the Creation Equation, it occurred to me that it could create things of its own accord. And if I let it go its way, what would it create?

Here is the idea. If you have a machine that create things as long as you feed it with some material, then if you connect pipe from the machine where all the stuff comes out to the part where you feed it with material, then it will start doing all sorts of weird things. Engineers call this feedback; mathematicians call this differential equations but I call it: the dog that has caught its tail. And believe me: that will spin and send the crockery flying.

So using the Creation Equation, I took whatever it created and fed it back into the same equation. My expectation that it would start creating something that would grow and grow. Something that would inflate from nothing. A universe from a proper little Big Bang.

Well folks, the photo at the top of this post is a photo of this new Universe, 1200 sachs after its creation. (FYI sachs is whatever you want to it be but if you want to think of it as nano-seconds, you may). After about 1200 sachs, my laptop runs out of steam but let that not dissuade us from being awed.

Below is an image from another angle. The Big Bang is at the top right. For the experts, it is surprising how asymmetric, flat and random this universe is. 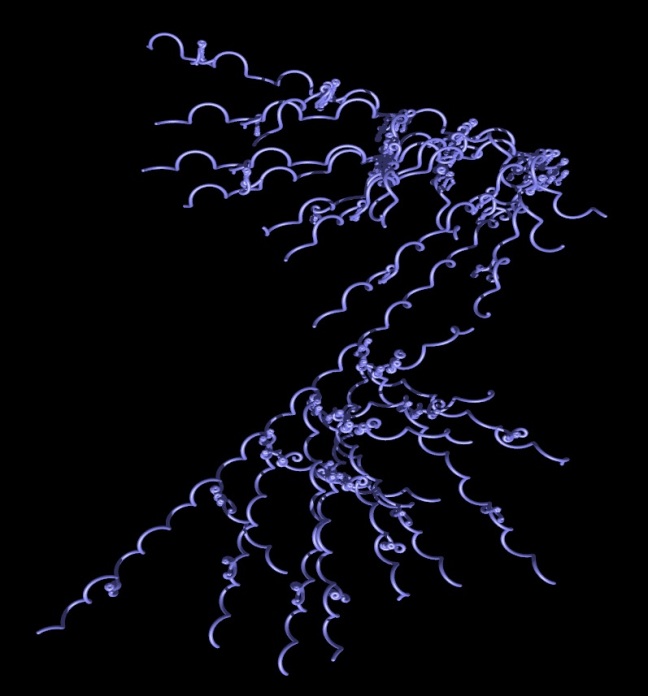 So what are we looking at here? The swirling tubes are in fact traces of moving particles. They spin and spiral and occasionally they seem to hug themselves as they spiral up into a tight column before going off again. At certain times the particles split into two and veer off into two separate directions.

What does it mean? Your guess is as good as mine.This new Universe has its own laws of physics that I have not studied but from experimenting a little, when I change these laws, i.e. when I change how the Creation Equation bites its own tail, the picture changes and a different universe is created. Surprisingly, the initial trigger, i.e. the minor whisper that sets the whole thing going doesn’t appear to matter that much. After a while the laws of the physics of this universe take over and generates whatever it does.

Clearly, I need to study this more but I thought that I should send this postcard so that you know that all is well. That I didn’t get wiped out during this Big Bang and that although I miss you terribly, it’s quite awe inspiring to be the first human to enter this new space. Love and all that. Genetic Fractals.

13 thoughts on “Postcard from a new Universe”