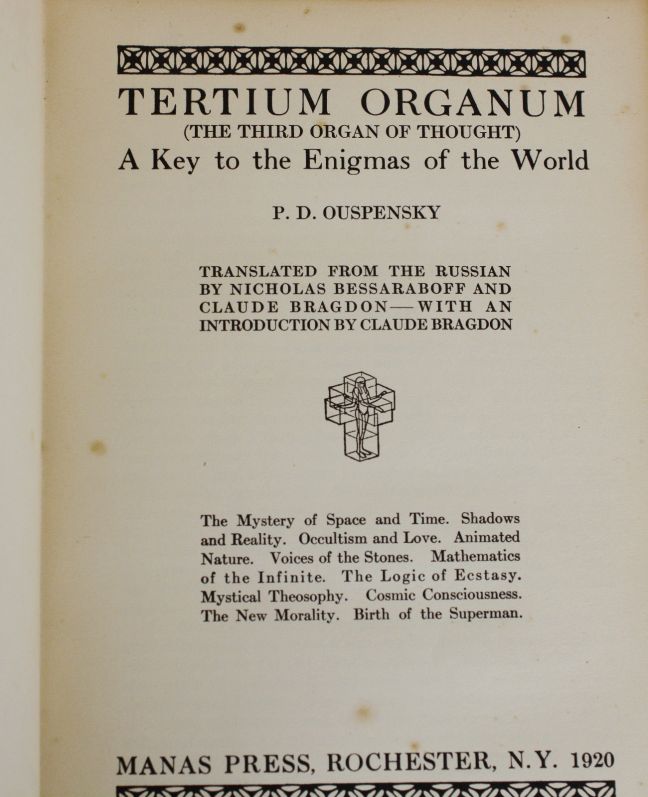 I have a 1965 copy of “Tertium Organum”, written by Piotr Ouspensky in 1912. It’s a gem of philosophy, mathematics and esotericism. I read it a decade a ago and got lost on every page as the narrative jumps from mathematics to consciousness to perception of animals to higher spirits etc. I just reread it and managed to make sense of it. It is truly an extraordinary book. At the time of publishing it was admired for its boldness. It’s byline says it all: “THE THIRD CANON OF THOUGHT – A Key to the Enigmas of the World”. The first canon of thought was by Aristotle and the second by Bacon.

I’m not sure you can summarize this book and do it justice but I will try anyway:

Building on Kant’s argument that space and time are features of the mind, necessary to reconstruct reality for our experience, Ouspensky demonstrates that our experience of time hides many of its genuine spatial qualities. We live in a higher dimensional world of which the ordinary person only experience 3 dimensions that flow by under steady passage of time.

Ouspensky then says that time is truly a spatial dimension and past and future exist always just like space in front of us and behind us exists always as well. He goes a step further and argues that since time is a 4th spatial dimension of which we only experience a slice at a time, there is a lot that happens outside that slice.

For example, karma, i.e. the inevitable connections between things that we do and their consequences can be seen as single events in our lives as a 4th dimensional connections between two slices of time. Similar the fact that the ends of your shoelace are connected in space via a string. If you know this, you might considers actions from a longer term impact perspective.

Ouspensky sees similar connections in higher spiritual domains. These are not conceptual connections but real and physical. Remember, all this is set in a Kantian worldview where our only connection with reality is through our perceptions and minds.

If you haven’t heard of Ouspensky before, it would be easy to write him off as another crackpot. But Ouspensky is in a very different class and if history had been slightly different, he might have made it to the list of great philosophers.

Unlike crackpots, Ouspensky researched his material very carefully. The arguments he makes in this book are thorough, starting from the only premise he makes at the very start: 1) we are conscious and 2) there is a world. In fact, he criticizes science (in 1900) for not having the same thoroughness. Science assumes that there us such a thing as matter out there which since Kant’s Critique of Reason” is known to be a questionable starting point.

But behind Ouspensky’s ideas there is an interesting backdrop. Ouspensky was born n 1878 a year before Einstein and both were peers of Minkowski (who contributed a lot to Einstein’s relativity work). At that time, the concepts of space and time were far from fully understood. Einstein’s extraordinary publication of general relativity which explains gravity as a curvature of space and time due to mass was published 3 years after Ouspensky’s ‘Tertium Organum”. Long before that, whilst Einstein and Ouspensky were schoolboys, Charles Howard Hinton wrote essays about 4-dimensional space in which he speculated that our world is the 3-dimensional section of 4-dimensional objects. Our world is like a membrane, he postulated. It took another 75 years before string theory was developed which considers that our world is a a membrane of a section of a high dimensional universe.

I don’t think that Ouspensky or Hinton were exceptional in their intuition, the thinking around higher dimensional interpretations of our world would have been an interesting and speculative topic around 1900. Although Einstein was the one to put it all together, he wasn’t the only  person working on these interpretations. But unlike his peers he was a stubborn outsider with a tremendous capacity for physics and mathematics.

Since Einstein had cracked the nut, there was no need to pursue further interpretations of space and time. And with that Ouspensky’s serious philosophical ideas became a side note in history.

Kant’s assertion that space and time are features of the mind is still considered valid by many philosopher’s today. Although Einstein’s physics is certainly valid for ‘our reality’, Kant’s critique suggests that ‘our reality’ only fits the human mind which comprises a 3-dimensional world and time.

It is a valid question to ask whether humanity could evolve a mind that is able to operate in more than 3 spatial dimensions and more than 1 time dimension. Or even a mind that is based on a completely different spatial-temporal geometry altogether.

And if humanity did evolve such a new spatial-temporal geometry of the mind, what would Einstein’s space-time theory look like then? And not just Einstein, we’d have to revisit Newton and perhaps even Plato. Imagine that.

If indeed space and time are features of the mind that allow us to make sense of our reality in the way that we do, than it would seem of scientific and philosophical importance to look beyond our mind’s space-time and make sense of the underlying reality.

Ouspensky was trying to do that but I think that he missed the mathematical skills to make more progress. Many mathematician’s on the other hand have missed and still miss the ability to think beyond abstraction and venture into their own minds. Those among us that venture into mind territory quickly get lost in esotericism or religion.

To me, as a mathematician, engineer, philosopher, explorer and 4D fractal geek, that looks like a really juicy apple to get my teeth into; at least to see what it tastes like. Developing a new foundation of reality however will require a new Einstein (or even a Zweistein as we like to joke).

I don’t know whether Ouspensky’s direction has been followed sufficiently to lead to a new Einstein that figures it all out any time soon. Ouspensky did have a large following in his time but his work was plagued by 2 world wars in which his country (Russia) and his latter home (England) were involved and he had to move around a bit.

But history tends to loop back sometimes and re-evaluate old ideas. Let’s see. Truth will always out.

14 thoughts on “The Kantian reality of Ouspensky’s 4D world”